Strength In The Storm

Gainesville neighbors band together as Irma’s floodwaters inundate their homes.

After Hurricane Irma wreaked havoc across the Caribbean and then the state of Florida, two Gainesville families were left to grapple with the damage left behind.

As a shrill whistling wind disturbed the early morning hours of Sept. 11th, Chris Deacon woke to the loud roar of trees crashing, followed by a harrowing explosion and a bright orange glow seeping through his bedroom window.
A 10-foot tree crashed on his home, barely missing his daughter’s room, and causing his wife’s car to erupt in flames.
“That was when we knew we had to get out of the house,” said Deacon, who sought refuge, along with his family, at his neighbor’s home in the middle of Hurricane Irma’s wrath. “It was a terrifying moment.”

The Pena family provided dry clothes and shelter for the Deacons; however, it would be just a couple of hours before they faced some devastation of their own.
At approximately 6 a.m., Gianni Pena, 18, whose bedroom is a converted garage, woke up to discover his room was flooding. He, along with his parents and girlfriend, moved quickly to salvage all they could ­ – clothes, photo albums and some prized childhood possessions.
Everything else in his bedroom was lost to the tainted, murky waters brought in by the storm. The smell of dirty water and the early onset of mildew lingered in the air.
“The impacts from the hurricane were far greater than what I expected,” said his mother, Luisa Pena, who originally thought there’d be just a couple of downed power lines and fallen trees. “I never imagined that we would have this level of flooding in our area.”
The family also lost three cars and all of the equipment for their landscape business to floodwaters, which reached five feet deep both at their home and at the Deacon’s.
For days, her home was only accessible by canoe. The usual hum of air-conditioning has been replaced by a gas-powered generator and the only light in her living room comes from candles.
“The whole experience has been so surreal,” said Luisa, who has refused to leave her house since Irma struck. “I’m going to protect what little I have left.”
Irma was one of the most powerful Atlantic hurricanes on record before barreling into the Florida Keys and moving inland to wreak havoc across the third-most populous US state.
By the time it reached Gainesville, Irma had weakened to a Category 1 storm, but still packed powerful winds that stretched to North Carolina. Homes were destroyed, rivers swelled to dangerous levels and debris lined the streets.

Luisa Pena is embraced by her son, Gianni, after she got off the phone with an insurance company in Gainesville, Fla., Sept. 14, 2017.

Chris Deacon takes a break from salvaging items throughout his house and looks at the damage left behind from Hurricane Irma in Gainesville, Fla., Sept. 15, 2017. 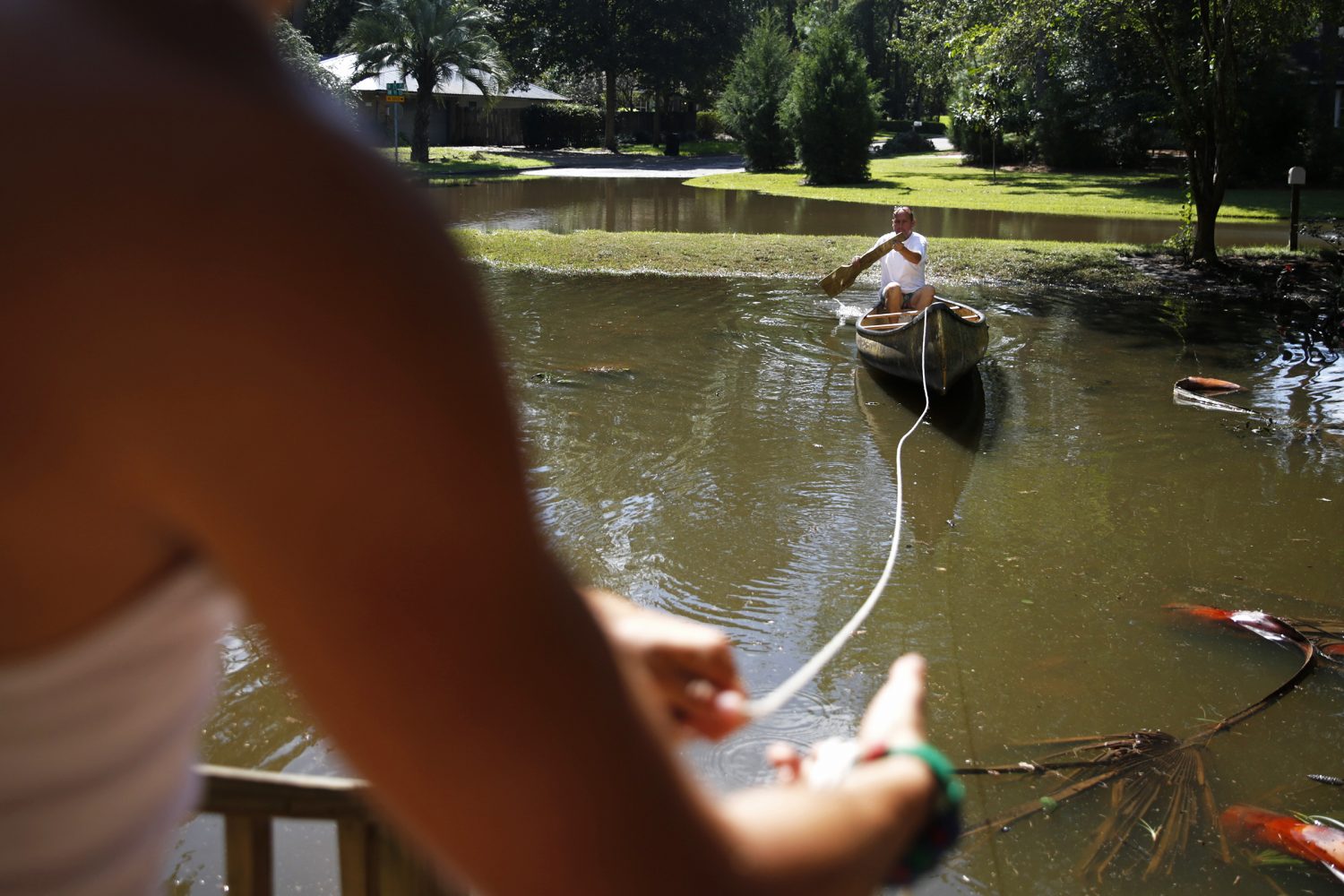 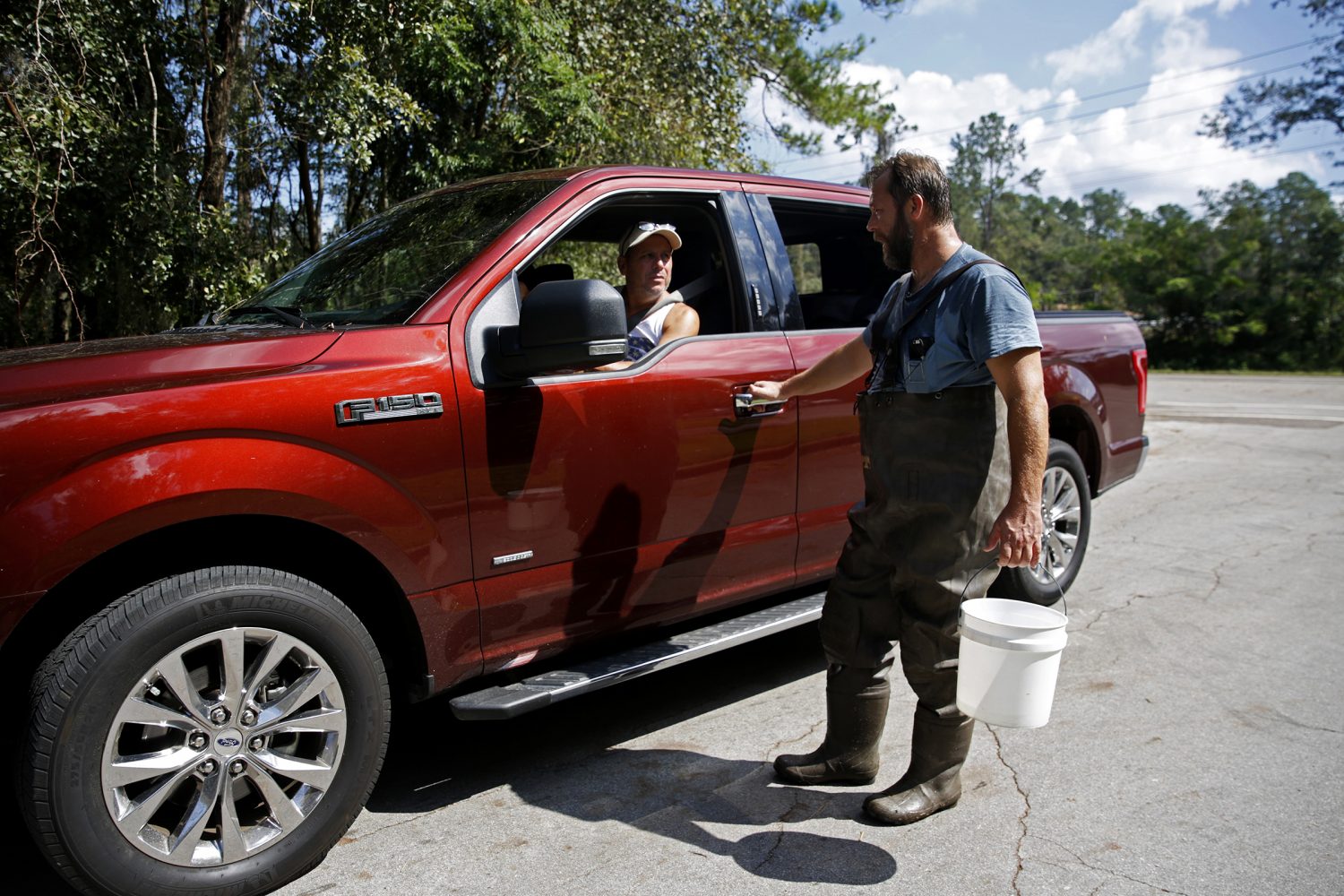 Mauricio Pena checks in on Chris Deacon as they both work to salvage what they can from their homes in Gainesville, Fla., Sept. 15, 2017.

Even so, as the two families surveyed the damage after Irma, they knew they had been lucky. The death toll from the storm reached 75 in their state, according to the Florida Department of Emergency Management in Tallahassee

“I’m most thankful for the fact that we are alive and that tree didn’t come down on us,” said Deacon, who had just moved to the home with his family two months earlier.
Though they were able to evacuate to safety, their home, left compromised and defenseless against the hurricane, became inundated with water.
Without a reliable home to go back to, the Deacons are now living in a small two-bedroom apartment down the street. For the first couple of nights, trash bags full of salvaged clothes, kitchen essentials and a lone air mattress were all that adorned the family’s new dwelling.
The road to recovery has been difficult. Long days have been spent talking to different insurances and GoFundMe campaigns have been made as the two families try to reassemble the lives they had before the storm.
Even through the difficult times, at least the families have each other.
“Things don’t matter, things can be replaced but lives can’t,” said Deacon.