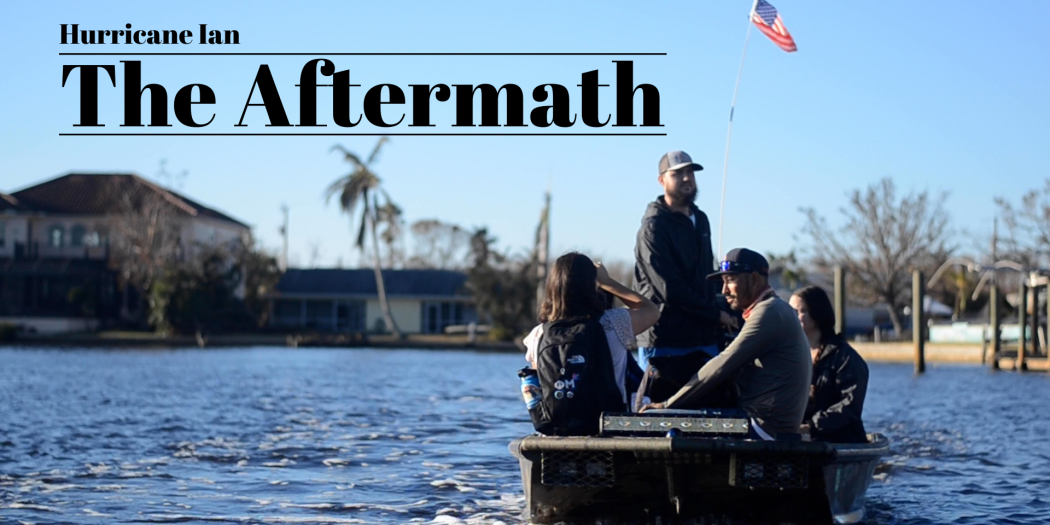 On September 28, 2022, Category 4 Hurricane Ian struck the Southwest coast of Florida, leaving destruction in its path.

In the wake of this catastrophic event, locals had to pick up the pieces.

Follow along with seven stories of tragedy and triumph in the aftermath.

A 74-year-old Fort Myers woman returns to her home after evacuating for Hurricane Ian. She reunites with her husband, and her family comes to the rescue for the cleanup.

A woman and her family return to their home of 17 years after leaving for Hurricane Ian. As they make the journey inland, shuttling strangers across the island, they’re unsure what to expect. When they arrive, they find their community in shambles.

An Alachua County native takes it upon himself to help those impacted by Hurricane Ian. He finds himself heading toward Pine Island as the agricultural community is cut off from the mainland.

North Fort Myers resident Tamara Searcy’s home was flooded, left without water and power after Hurricane Ian hit. One disaster relief organization gave her the means to continue to rebuild what was lost, piece by piece.

Hurricane Ian turned a marina into a wrecking yard, ruining a local business and hundreds of homes on the water.

John Terlep knew well before taking over Pair-A-Dice Produce that he wanted to own the business someday. Since 2014, he’s turned the Fort Myers produce stand into a staple of the area. But when Hurricane Ian hit, it nearly stole his coveted business — and his livelihood.

Woman loses home to hurricane for the second time

A 69-year-old woman has now lived through not one, but two hurricanes. Each time, her house was completely destroyed, forcing the Cuban immigrant to start her life over again.

Meet the team behind the project.