PINE ISLAND, Fla. – Chris Murphy backs up his pickup truck, drops his boat into the water and fires up the engine.

It’s something he said he does just about every weekend.

“Probably getting ready to go on the lake and do some wake surfing,” Murphy said. “That’s pretty much what we do nonstop.”

Instead, the Gainesville native who grew up on Newnans Lake is bringing his low-riding swamp boat into the unfamiliar waters of Southwest Florida to help those impacted by Hurricane Ian.

“Knowing that we had the resources to do something, we just decided to come down and work the weekend to help some people out,” Murphy said. 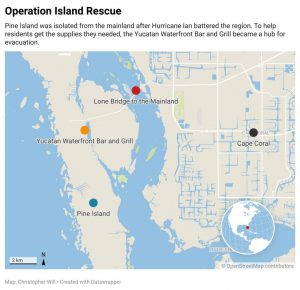 Murphy made the trip with his daughter and her husband to transport those stranded on Pine Island. The group said they slept in a Publix parking lot before taking on the day.

The barrier island is an agricultural area just west of Cape Coral.

The nearly 17-mile-long island is isolated from the mainland after a connecting bridge was damaged in the storm and deemed unsafe to travel.

Those without an aquatic form of transportation were trapped without the resources to survive for a long period of time.

As Murphy traveled to the island for the first time, he said he became aware of the full scale of the destruction.

“Don’t you know this was a beautiful stretch of property right here along the water,” Murphy said as he traveled along the canal. “Pretty much decimated.”

As Murphy arrives at the island, the first thing he sees is a makeshift evacuation command center at what used to be the Yucatan Waterfront Bar and Grill.

The restaurant’s garage doors, which face the water, are bent and tangled. The ground is covered by the mud that the storm surge left behind. The interior of the building has been gutted by the nearly 150 mph winds that pounded the region. Televisions dangle from the walls of what once was a bar.

The place once meant for food and fun is unrecognizable.

Now, the restaurant serves as a hub for assistance and resources on the island. The United States Coast Guard, volunteers and firefighters from across the Southeast United States lined the dock to help move people off the island and bring back any supplies they can.

Marcus Haupt was among those organizing the relief effort.

“We have the strongest knit community around anywhere,” Haupt said.

Even those impacted by the storm have been looking to help in any way they can.

Paul Dinger, a retired resident of the island, has been without power and water since the storm hit.

But Dinger said he couldn’t sit and do nothing.

He drove up and down the roads doing his best to clear whatever debris he could. He said he has the machinery to make the roads safe for travel again but needs to get back to the mainland to make it happen.

“I came down to see if I could get a ride back to Fort Myers to get the parts to my Bobcat so that I can do some cleanup,” he said, “If they can fuel that big machine of mine, I can clean this road off.”

And that’s exactly what the volunteers, like Murphy, were there to do.

“We can take one more,” Murphy said as he loaded his boat with passengers.

Just one more person looking to get Pine Island back to what it used to be.

And with just his boat and his family, Murphy has helped the people of Pine Island begin that recovery process. 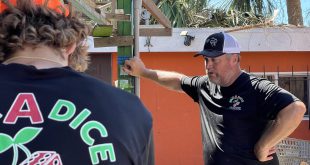